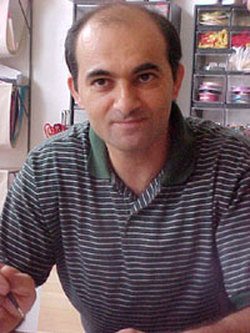 Master Woodcarver Boris Khechoyan has over 34 years of experience in woodcarving and has been internationally recognized for his talents continually over his illustrious career. Born in Baku City, USSR, Boris began his woodcarving career in 1978 at the Azerbaijan College of Fine Arts in the former Soviet Union. A natural at the craft, Boris received numerous awards from student exhibitions in Moscow while attending college.

Boris continued his formal schooling at the University of Architecture in Baku, Azerbaijan, where he studied various other styles of woodcarvings, including Gothic, Rococo, Empire and Classicism. It is there that he developed a talent for inlaid work, incrustations, Mother of Pearl, bone and hand carvings – specialties that he continues to be in high demand for to this day. In fact, some of the pieces Boris produced during this time are still on display at the Art Museum of Baku.

While at the University, Boris began working at the Special Scientific Restoration Workshop, where he helped restore antique museum furniture dating to the 15th Century. He also took part in the restoration of the Old Town of Baku City, where he designed and carved elaborate doors and windows for buildings in the city, which dates to the 12th Century.

Boris became a Master Woodcarver in 1985, after entering his work in exhibitions in Moscow and Armenia, USSR, where he received his Master Woodcarvers Certificate. The certificate is granted for a lifetime and puts him at the pinnacle of his chosen profession.

With his Eastern European successes behind him, Boris immigrated to the United States in 1991, due to fighting that was occurring between Armenians and Azeris at the time. With only a box of handmade tools and a portfolio to his name, he settled in St. Louis, Missouri, hoping that his gift would serve him as well in the U.S. as it had in his native country. His hopes were soon realized, as he immediately took top awards at that year’s International Woodcarvers Congress-a feat that he repeated the two following years, as well

In the 17 years that Boris and his family have made the United States home, private collectors, churches and corporations have all commissioned him to create unique masterpieces for them. Perhaps his greatest honor yet came during the Pope John Paul II’s historic visit to St. Louis in 1999. Boris was asked by the Archdiocese of St. Louis to help restore pieces in the Archbishop’s residence in preparation for the Pope’s visit. Boris expertly fulfilled this request and also most generously gifted a magnificent walnut hand-carved chair to the Archbishop’s Residence for the Holy Father’s visit.

Boris and his work have been featured on HGTV, the Home and Garden Channel, as well as in a number of local and national newspaper and magazine articles. 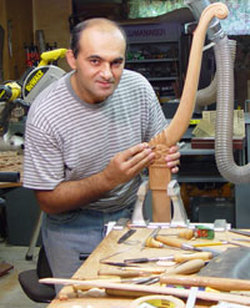 Although Boris is modest and never seeks fame, he has been written about in newspaper’s and magazines see the full articles here